When visiting Rome, a friendly advise. Dedicate one morning to an early walk, from 6 to 7 am

For a lover of Ancient Rome entering this museum is like opening the gates of paradise. Furthermore, of an uncrowded one. As I wrote in the previous post I’m quite fond of peaceful spots and this is one indeed. Palazzo Massimo alle Terme hosts an extraordinary collection of Roman statues, mosaics and frescoes discovered from the XIXth century during works in the city.

My favourite statue is “the boxer”, a greek bronze from the IV century B.C., probably work of Lisipo, and discovered in the Quirinal Hill when excavating the Therms of Constantine.

In this close-up you can see the details (check out this vid for more close-ups) with which the artist has portrayed the fighter. The wounds (the blood is represented using copper) in his face, the swollen eyes, the broken lip, the mashed ears. The athlete is resting, it is not the usual image of victory; maybe he’s gathering his strength to continue the fight, or has been defeated and turns to an unknown referee, waiting for mercy or the victory veredict. Waiting, as the statue had for hundreds of years. This picture, taken when the statue was discovered in the XIXth century, touches me deeply.

In the third floor of the museum you can see the frescoes and mosaics that decorated the rooms in some patrician villas. My favourite place is the reconstruction of the “summer dinner room” in the Villa of Livia Drusilla, wife of the first Roman Emperor, Augustus.

The villa was in the Flaminian road, ad gallinas albas (“where the white chickens”). When Livia married Octavian, a prodigy occurred. An eagle dropped a white chicken in her lap; the bird had a twig of laurel with berries in its beak. Following the soothsayers advice, the chicken and its offspring were raised in the villa, and a forest of laurel oaks was planted around its perimetre. The leaves of these trees were used as crowns in the imperial triumphs, and the withering of the plants was considered an ill omen. It is said that before the death of Nero, the whole forest and all the chickens in the villa died.

It has always fascinated me how superstitious the romans were. The days were divided in favourable and ill-fated ones. No public activity could take place during the second ones and a serious military defeat or a disastrous event turned some days from fasti to nefasti. For instance, July 18th was the day of the Clades Gallica (the Gallian disaster), to commemorate the defeat, near the river Allia, of the Roman army against the gauls in the year 387 BC.

Soldiers are an extraordinary race of men: tough as shield leather, superstitious as egyptians, and as sentimental as Sabine grandmothers.

To come back to the Museum, what makes this room special (I usually sit for half an hour in the central couch and I like to hear the Ah! and Oh! of people entering) is the illumination.

Lights increase and decrease in intensity to reproduce the real light during different hours of the day, from dawn to sunset, that Livia’s dinner guests witnessed a couple of thousands years ago. The effect is absolutely marvellous; the paintings in the dining room were ripped off from the original walls, transferred and reconstructed in this area. Although I have seen several times the process of tearing off frescoes it keeps son sounding like magic to me.

There are many other masterpieces in the Museum. The remaining bronzes of Nemi’s ships, reproductions of famous greek sculptures…

… and some quite known mosaics, as these one representing the four teams of the chariot races: green, red, white and blue. The charioteers conducted the horses with the reins, not only with the hands, but also with the movement of their body check this relief. They were taller and bulkier than nowadays jockeys, for instance. One of the main dangers during the races was to remain trapped under the horses or the chariot while tied to them, that’s why they had a knife between the leather strips of the bodice. If they were quick enough they could save themselves cutting the reins, but it’s no wonder that charioteers, even if well paid and adored by the masses as modern football players, often died very young.

All this and many more in my favourite museum in Rome. Another of my favourite pieces is this ivory mask. The pic is not mine (click for source) as it is very delicate is held in very particular light conditions. It was recovered by the Carabinieri group specialized on Art smuggling.

A few days ago, the NYT published a very critical article about Rome and her many problems, starting with the dirt. I will not deny something that is obvious. When I cross the city in bike, two words come out from my mouth quite often: “che schifo” (what a filfth). Rome is more a cynical step-mother than a caring one; she is a little bit mignotta, or like Anna Magnani in “Mamma Roma”, insulting you while laughing and singing.

This is a city of contrasts, where the “che schifo” can be followed with the blink of an eye by a “oh che bello!”. A couple of days ago, at 7.30 in the morning, all the backstage doors of the “Teatro dell’Opera” were open because they were moving the set to Caracalla’s for the summer season and we had to stop the bike while some pieces of the stage were loaded in a truck. I turned my head and I saw this:

While the workers and technicians were moving and fixing the stage, the whole theatre was lit. I opened my mouth and gasped like a red fish out of water. I felt absolutely happy during those two minutes. Coming back home that afternoon I thought to write about my favourite spots of the city.

I advice friends who want to visit Rome to come if they can between end January and early February. It is not the best time of the year if you’re looking for warm weather or clear blue skies, but it’s the only low season period in a town invaded by hundreds of thousands of tourists every year. The ideal months to visit the city in the best weather conditions are May or October, but get ready to feel a little bit like a sheep on a flock. Or maybe don’t; my favourite spots are usually the less crowded ones. My intention is to write several posts about them but most probably this will be the first and only post on the matter.

Rome is the city where you can see some of the best known Caravaggio paintings for free. Three of them are in the church of San Luigi dei Francesi, France’s National Church in Rome. Fortunately the Spanish consulate is at only five minutes walk, therefore everytime I have to make some bureaucratic paperwork I carry with me a few coins (for the lighting), and I can watch this: 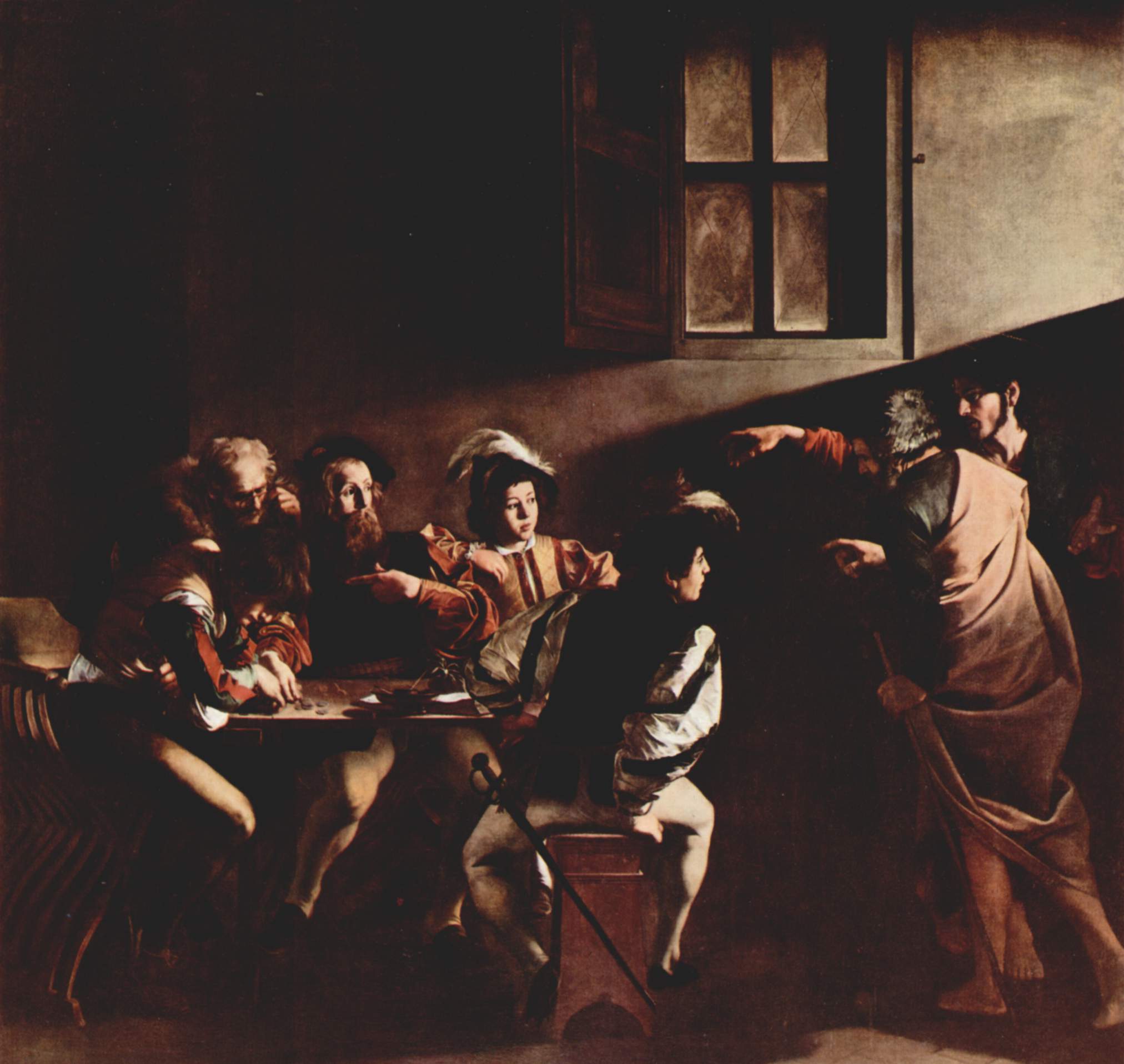 Another two are in the church of Santa Maria del Popolo (St. Peter’s Crucifixion and the stunning St. Paul’s conversion):

“Caravaggio-The Conversion on the Way to Damascus” by Caravaggio – Web Gallery of Art:   Image  Info about artwork. Licensed under Public Domain via Wikimedia Commons.

And in the church of Sant Agostino, the “Madonna dei Pellegrini”, or Pilgrim’s Madonna. In the same church where is buried the famous courtesan Fiammetta Michaelis, lover of Cesare Borgia. Roma mignotta, saints and sinners, virgins and whores

I have been asked many times by Italian friends why on earth do I work in Rome. When I’m in a particularly bad mood I answer: “Stendhal’s syndrome screwed me”. When I feel poetic I put examples like this. My husband has sent me by whatsapp these pictures of an old Roman road that has appeared during some works. As usual, here in Rome, when you dig a few meters Ancient Rome pops up and reminds us that the new city is built using the old one as foundation.

I guess that what differenciates normal people of me, Ancient-Rome-Nerd, is that when they see a disorganized pile of old bricks, I observe old Romans, as through a viewfinder. To me the remains of the old consular road (I presume Via Prenestina, this site is just a few meters away of the modern one) are not just stones. I can see as clear as they were in the picture the farmers transporting in their carts the vegetables they are to sell in the city, a messenger of the Imperial post service hurrying to deliver on time the letters he carries to the Palatine Hill, some slaves buying groceries in the shops in one side of the road.

This reminds me that, some years ago, a very famous Italian stylist (Valentino) got the necessary authorisations to make some kind of super-huge party near the Colosseum, and he had the “brilliant” idea (authorised by someone as bright as he) to “complete” the columns in the Via Sacra with new, white, plastic-polyurethane ones. Fortunately I have not found pictures of what they did (the kitsch effect was completed by night as the columns were iluminated inside). Anyway, the plastic shining bright white columns remained for months, as “tourists liked them”. I  found that simply disgusting.

Because, when you don’t have enough imagination as to see those columns forming part of the temple of Venus and Rome you can always watch this video, or buy a ticket to Cinecittà and admire the spectacular reconstruction of the city which was used as set for my admired HBO’s “Rome”, without disturbing the archeological area.

But I was talking about my Stendhal’s Syndrome. The modern city of Rome stresses so much that I have to pump it up continually and repeatedly. Tonight I will have an extra dosis, and I will endure and resist the next public transportation strikes or the disastrous state of modern roads and sidewalks for several months. I have booked a night visit to the Vatican Museums. Which reminds me that I have to take as many notes and pictures as I can of the Borgia apartments.